LUMS Startup Weekend Lahore remained in news for weeks. Even after it has concluded, it still remains topic of interest for many.

The Startup weekend is believed to be one of the most famous and largest festivals for entrepreneurs.
The event was brought to you by the partnership of Karandaaz Pakistan and LUMS.

The competition was won by ‘Paycard‘, a NFC payment solution.

Paycard idea was to to improve the existing payment solutions by using an NFC-enabled prepaid card which can be charged up to 5000-PKR at a time through the easy load. Retailers and sellers can enable a simple swipe-based payment method through Paycard merchant for customers. Customer must have Paycard to complete transaction.

Karandaaz aims to create a developed Pakistan. It aims financial and digital development in Pakistan. It believes that it is only possible when the people related to these fields interact with each other to widen their perspective and produce amazing work. The startup weekend was part of its aim; the event brought together people including entrepreneurs and mentors.

For the 8tth time LUMS has held the startup weekend. Entrepreneurs from all across the Pakistan made it to the event to contribute their efforts towards the development.

On the first day 60 entrepreneurs shared their idea and only 11 best ideas were selected for the final round.
To prepare, collect material and arrange it the participants were given 70 hours.

When the teams were ready with their presentations they were given just five minutes to open up their idea, answer the jury and conclude. These 5 minutes were enough to decide the winner of the Startup Weekend.

The news of the Startup Weekend Lahore winner was announced in a press release. The press release also stated that NFC payment solution, ‘Paycard’ won the competition as their idea was unique and beneficial.

On the second rank was ‘Groupie’, a way to merge individual pictures of friends into one large group photo. The third place was acquired by ‘Home Grown’ that promoted horticulture.

The seven other of the eleven shortlisted startup ideas included:

1) Freshalla – the fruit delivery website and app,
2) Pakfit – a platform that connects professionals with individuals looking to get in shape,
3) Pak Builds – a digital marketplace for material services providers and contractors,
4) Health Monitoring System – a wearable health monitoring and notification device,
5) Kabara Online – a digital marketplace to sell goods a person doesn’t need any more,
6) Animatica Math – a personalized animation app to encourage kids’ interest in mathematics,
7) Dream X – an Urdu digital assistant which can interpret and run commands given to it in Urdu language.

When the awards were announced in Startup Weekend Lahore  the ‘Proximate’ that aims to provide users with relevant ads when they pass near a proximate beacon installed on any retail outlet, received an honorary mention.

“We feel privileged to be part of LUMS Startup Weekend Lahore to inspire youth into pursuing entrepreneurship in their professional careers. Finding and nurturing fresher ideas through proper training and guidance will go on to reinforce and add value to Pakistan’s startup landscape.

The advancement in digital technology has helped a lot of promising digital startups to surface in the country which will go on to morph into small and medium businesses in the near future. Karandaaz Pakistan is committed to facilitating SMEs by promoting access to finance by employing technology-enabled digital solutions. We look forward to helping accelerate promising startups in order to enable them to contribute to the country’s economy.”

Samar Hassan the Head of Communications at Karandaaz took the stage to say,

“The cross-cutting themes at Karandaaz are innovation, youth, and women entrepreneurship. At Karandaaz we strongly believe that you guys (youth) are the future.”

“You are the driving force of the nation. If you go places, we need to be behind you to support you, to uplift you, and I am sure you will go places regardless of whether we are there to support you or not. But we are here to reiterate that commitment to you.”

“The cross-cutting themes at Karandaaz are innovation, youth, and women entrepreneurship. At Karandaaz we strongly believe that you guys (youth) are the future,” said Samar Hasan, Head of Communications at Karandaaz Pakistan. “You are the driving force of the nation. If you go places, we need to be behind you to support you, to uplift you, and I am sure you will go places regardless of whether we are there to support you or not. But we are here to reiterate that commitment to you.” 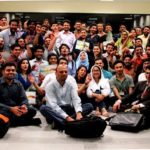